It’s January 2019 and the NFL season is coming to an end. This Sunday the best four teams will be facing off to decide who will play in Super Bowl LIII. It’s a bittersweet time of the year for Football fans. 28 NFL teams are starting the offseason and the next big Football event fans have to look forward to is the NFL Draft.. but not anymore.

On February 9th, 2019 a new league, The Alliance of American Football, is kicking off it’s debt season. Now, most everyone will make the immediate comparison to the XFL of the early 2000’s and assume this new league will fail. ESPN’s 30 for 30 did an awesome job documenting the debacle that was the XFL, and while the XFL is in it’s own process of rebuild with plans to debut in 2020, let me tell you why I believe the AAF will succeed.

These teams are comprised of players that football fans will recognize. Players that have played at the colleges and universities that surround to their given teams and they will represent their team’s city in an effort to play professional football for a living. For example, The Birmingham Iron will feature famed players from Auburn and Alabama like Trent Richardson and Chris Davis. The Memphis Express will feature players Zach Mettenberger from LSU, “Pig” Howard from the University of Tennessee, and Zac Stacy from Vanderbilt University. The Alliance is also committed to the betterment of their players by providing “a comprehensive bonus system, post-football career planning as well as counseling and scholarship support for postsecondary education.” These once famed College Football stars now have a second chance with football and also have ways to better themselves for their live beyond the game. These players will the opportunity to draw the attention of the fans that know their names which will contribute to these teams being embraced by their home city.

If you live near a city that has an NFL team, it’s likely that you’re willing to travel to see these teams play so you can see your favorite football stars in actions! The Alliance has selected host cities that make sense for a spring football league. They selected cities that are great places to visit, have other tourist attractions, but aren’t considered big enough to be awarded an NFL franchise. The Alliance will have teams that already have NFL franchises like Atlanta andArizona but will be hosted by cities like Memphis, Birmingham, Salt Lake City, and Orlando who have dreamed of having their own professional football team. This is an opportunity for the residents of these cities without existing NFL teams, who have felt overlooked, to embrace these teams and to see rivalries birthed before their eyes on the gridiron.

The Coaches and Leadership

The Alliance’s leadership and coaching staffs is made up of NFL Legends. Co-Founders Charlie Ebersol and Bill Polian bring together the perfect marriage of NFL Hall of Fame level football knowledge and top tier production technology. With these two partnering together, it gives the Alliance a better start than that of the XFL of 2001. This isn’t a League that relies solely on the “lights, camera, action,” but has a focus on providing quality football for fans to enjoy. Troy Poloumalu, the Head of Player Relations, and Hines Ward, the Head of Football Development, are two names that are recognized for their great NFL careers, but they bring a depth to the Alliance that previous organizations did not have. Coaches Mike Singletary, Steve Spurrier, Mike Martz are former NFL and College Football coaches that fans recognize. When the XFL debuted in 2001, the production leaned so heavily on the shock value of what Vince McMahon could cook up and the quality of the game was lacking which lead to it’s demise after just one season.

The Alliance will play 12 weeks starting February 9th. These games will be played both on Saturday nights and Sunday afternoons and the Alliance will have it’s championship game over the weekend of April 26-28 2019, which is the same weekend as the NFL Draft. Why is that great for fans? This provides an opportunity for the Alliance to capture the attention of College Football fans who would be watching games on Saturdays in the fall, as well as the fans who would be tuning in on an Autumn Sundays during the Fall NFL season. AAF.com details that, “fans will be able to stream Alliance matchups live via the free Alliance app while accessing integrated fantasy options with real rewards — for themselves and the players they are cheering on.” How will this contribute to the success of the Alliance? It provides yet another way to capture the attention of tradition NFL fans who love Fantasy Football. With how popular both traditional fantasy football and weekly Fantasy Football has been over the last decade, there is another way for the fans to get their football fix. 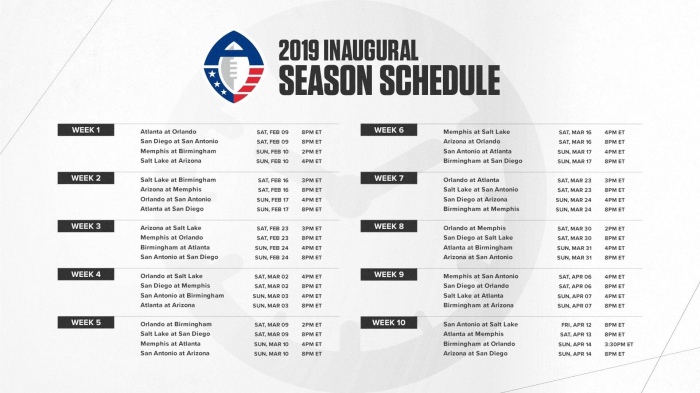 For the record, this is not meant to bash the XFL or any other failed Spring Football leagues, but to detail how the Alliance has taken some of the best minds in football to ensure that the quality of the game will be as good as it can be, and have considered what it will take to capture football fan’s from day one.

As a new fan, and as a proud Tennessean, I will be taking my fan talents to none other than the Memphis Express! #AllAboard✈️!

Take a second and watch this video about The Alliance: