Nashville is in for the party of the year as it will be the host city of the 2019 NFL Draft! April 25th is right around the corner and with this year’s draft being a great year for defensive depth, it is a great time for the Tennessee Titans to build on the defensive side of the ball. As we know, Jon Robinson has a long “To-Do” list to address the lack of pass rush and run defense. They need to replace some older players if they want to remain one the best defenses in the league. The promotion of Arthur Smith to offensive coordinator was monumental in solidifying their draft strategy. They need to improve mightily on offense if they want to compete in the talented AFC South. Dean Pees will be returning to help Vrabel and JR continue the Titans’ defensive efforts. I hope Smith’s familiarity with Marcus the past few years will allow this off season to be a smoother transition than those in years past. I feel like there’s no two people more on the same page in that locker room than Smith and Mariota. I hope the front office gets this one right, because doing so would set them up for an exciting few years. Let’s look at some of the best options for their first round pick and I’ll tell you my favorite for each scenario.

The Titans need to improve in several areas, which was made clear by a roller coaster of a 2018 season. Brian Orakpo was a shell of himself last year and he has since retired, which takes off the “Address Aging Defensive Linemen” task on Jon Robinson’s “To-Do” list. He was quite the liability in pass coverage over the last few seasons, but especially bad last year. The 32-year-old and 4-time pro bowler did what the Titans signed him to do in years past, but it was clearly time to move on before he announced his retirement.  Derrick Morgan’s future with the team is up in the air, but there has been a lack of impact from Morgan as well, and we will stay tuned to see if he sticks around for the Titans. On the positive, Jayon Brown and Rashaan Evans have shown themselves able to fill the void at middle linebacker that Wesley Woodyard when the man who compares himself to a “fine aged wine” decides to move on from football. Brown and Evans both had breakout seasons last year, not to mention the “Fine Wine” Woodyard kept finding ways to impact games.

Newcomer Harold Landry should hold down the left outside linebacker role, but the right outside linebacker is open for the taking. Although Sharif Finch had a better than expected season in 2018, I fully expect this ROLB position to be the main priority for their first round pick. Some names that I’d like to hear called are: Jachai Polite, Brian Burns, Jaylon Ferguson, Te’Von Coney, Germain Pratt, Khalil Hodge, D’Andre Walker, Amani Hooker, or Devin Bush. Hooker is a converted safety. Coney, Pratt, and Bush are inside linebackers. Polite, Ferguson, and Burns are under considered edge rushers and could double as a needed defensive end as well.

Any of those guys would be fine, but I really like what I’ve seen from Montez Sweat from Mississippi State. He has the instinct and tenacity that you want an OLB/DE to possess and seems to have a knack for being in the right spot at the right time.

Jurrell Casey is the best defensive player on the Titans roster and is holding down the right defensive end position. The 2014 4th round pick DaQuan Jones has made some significant improvements over the last two seasons but Bennie Hogan and Austin Johnson are two guys that have a lot to prove at the nose tackle position if they plan on sticking around in Nashville. Some names that I’d like to see Tennessee add to fill that void of left defensive end are: Jachai Polite, Brian Burns, Jaylon Ferguson, Rashan Gary, Montez Sweat, Clelin Ferrell, Zach Allen, Oshane Ximines, Jalen Jelks, or Chase Winovich. A lot of those players could double as an outside linebacker.  The 3-4 defense is the most popular defensive formation in the league right now. It also tends to blur the line on the positions regarding who can contribute at a given position. Pass coverage, as well as overall lateral quickness, become more crucial at the NFL level. 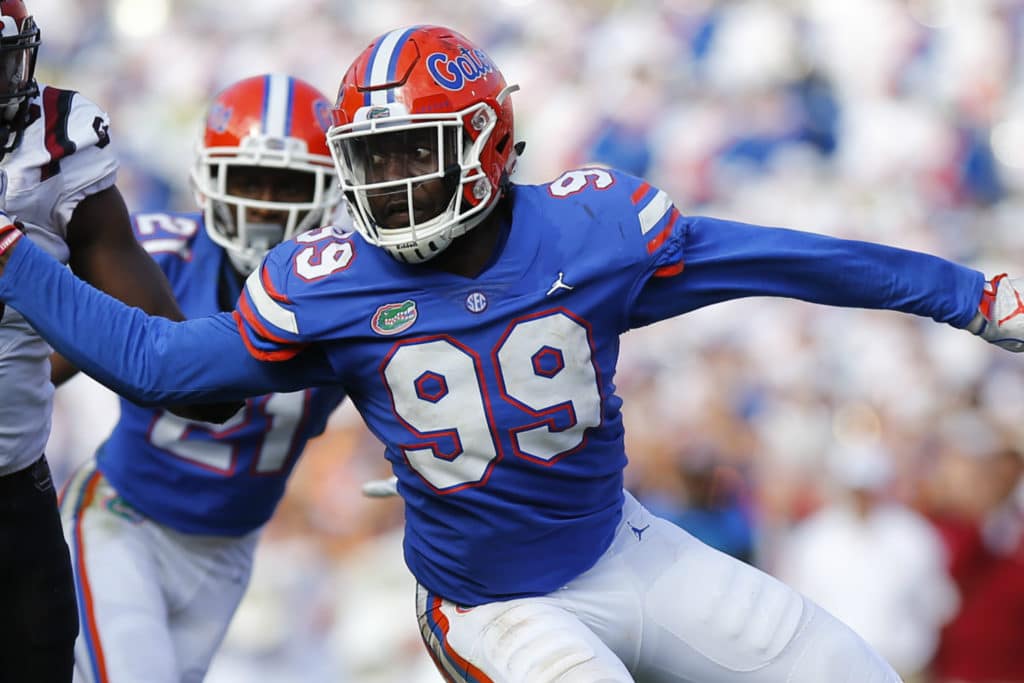 Jachai Polite is my choice for the hybrid edge role and would add instant pressure on opponents next season. He has the speed and determination you want on your team and not chasing your quarterback. He’s your prototypical player that pins his ears back disrupts plays by constantly and quickly getting in backfields.

Let’s move to the offensive side of the ball. The offensive line was suspect at times this season, and I hear everyone screaming for early round picks to address the interior Offensive Line. Do I agree the line needs help? Yes, but I want to see Jon Robinson address that need in the back half of the draft, cause I don’t see a Quinton Nelson 2.0 in this years draft. Derek Henry seems to have solidified himself as the feature back in Nashville. Marcus Mariota is working with yet another play caller, and hopefully Tennessee can address the lack of weapons he has at his disposal. I believe that situation is direr than that of the Offensive Line.

Corey Davis continues to impress but not as much or as fast as fans would like. There’s never been a consistent answer for the number two receiver, but there are a few names I’d like to see in the two-toned-blue next season: N’Keal Harry, Kevin Harmon, AJ Brown, DK Metcalf, Marquise Brown, Emanuel Hall, Riley Ridley, and Hakeem Butler. They desperately need someone to pose enough of a threat, alongside Davis, to make defenses unable to stack the box.

I think AJ Brown is going to be the next great receiver in the NFL. Watch one of his games and it’s not hard to see his star potential. He has the speed and hand strength to line up in the slot, but the sheer physical abilities to play on the outside. Selfishly this is the route I want to see the Titans take this year.

Delanie Walker is getting up there in age, and although he has stated that he is feeling great it’s always a big question mark when coming back from injury for players on the wrong side of 30. Jonnu Smith has made huge strides in his game, and it’s evident he has all the physical talents to compete for the starting role soon, but only time will tell if he can step into that role with authority. Anthony Firkser looked like a viable target in the passing game, but I’m not sure if he or Smith are good enough to fill the shoes of Walker. After all, the Titans just promoted their tight ends coach to offensive coordinator to replace Matt LaFluer, after Smith took an injury plagued group and made them one of the more productive units on the field. Marcus has leaned hard on Walker in the past and it really helps to have him or someone like him on the field. Getting a good tight end strengthens your overall line productivity and acts as a safe check-down in reaction to blitz-heavy defenses. The tight end position isn’t especially deep but here are some players that might help: Noah Fant, Josh Oliver, Irv Smith Jr, TJ Hockenson, Kaden Smith, and CJ Conrad. It’s yet to be seen if any of those players will make names for themselves at the NFL level. 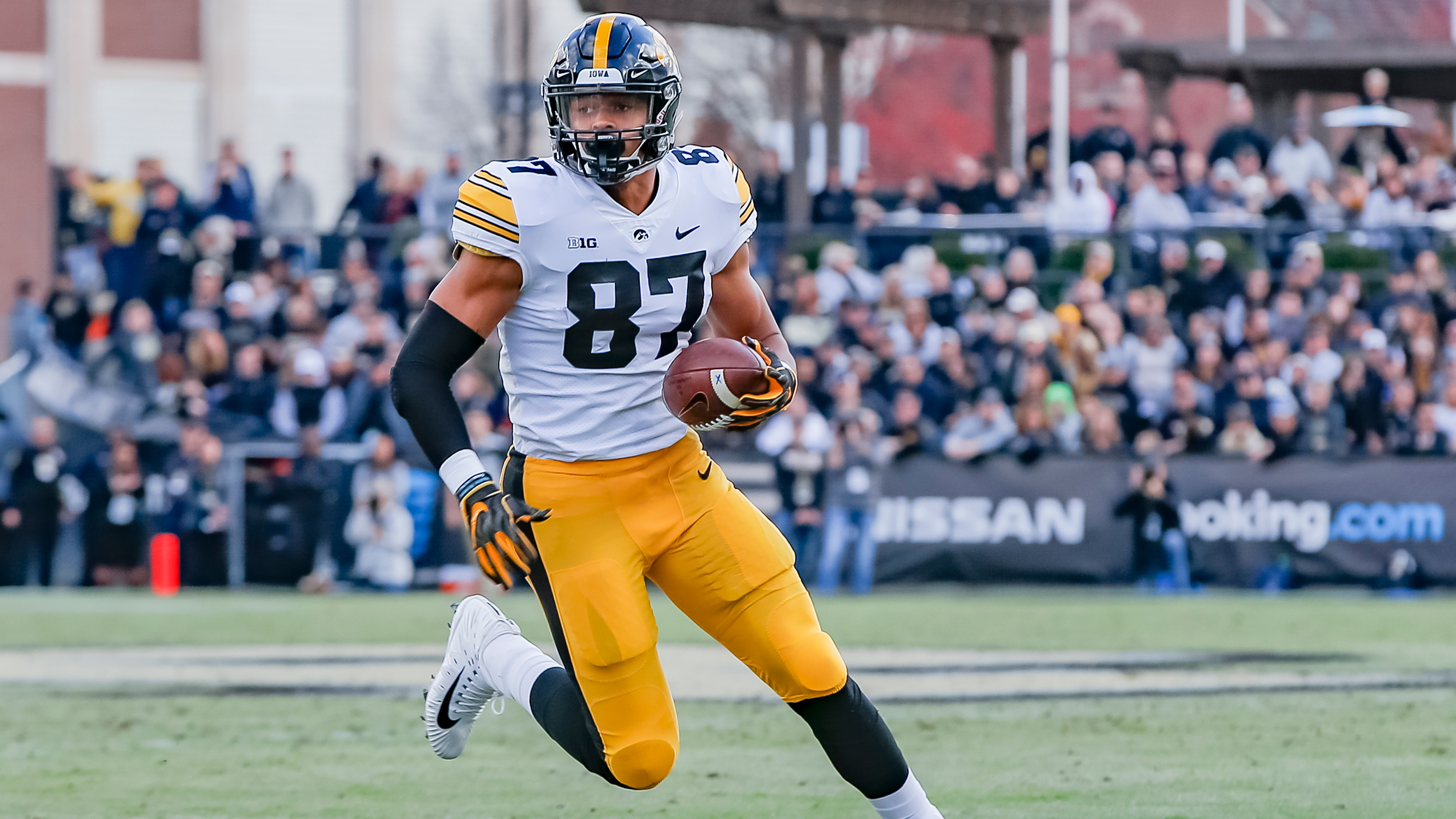 Noah Fant, to me, poses the most threat in the air. He reminds me of Evan Engram from Ole Miss, maybe not as fast but certainly looks like a receiver while running routes. His trusty hands could be a good weapon for Marcus and company next season.

It has become increasingly clear that the AFC South is no longer a one-team cakewalk.  Three teams had nine or more wins heading into the last week of the season, and Andrew Luck appears to have the Titans number. Luck’s health has become less of a question since the Colts dedicated to focus their attention to bolstering the offensive line and it paid huge dividends this past year going from the most sacked team in 2017 to the least in 2018. The Texans won the division, and seeing how they have one of the best defensive lines in the league and plenty of options on offense, the Titans have their work cut out for them if they want to take the next step and compete in this new AFC South. The Jaguars are in a bad place and the troubles in the locker room were very apparent on the field this season. The offense seemed to disappear despite having a stable of talented runners, and it was no help that they traded off their two main receivers which proved to be detrimental to Blake Bortles’ growth as an NFL QB. The Titans seem to be committed to their two Heisman winners, and I hope Henry’s ascension gives clear and undeniable direction to their play calling, but there are still moves to be made in free agency to fill weaknesses, and the draft will determine their location. Losing the last game of the season to the division rival and missing the playoffs creates a bitterness. This bitterness is something I hope the whole team carries with them this off season. 2019 will be pivotal to Nashville and their Titans, and it starts April 25th!

View all posts by Kurt McKibben